The eastern diamondback rattlesnake, Crotalus adamanteus, is the largest recognized rattlesnake species. The average size for this species is between three and six feet (36-72 in), but the largest recorded individual measured eight feet in length (96 in). Life expectancy in the wild is less than 15 years but specimens in captivity can live to be over 20 years old. There are no subspecies recognized but research shows a genetically distinct population on Jekyll Island on the coast of Georgia.

These snakes are most easily recognized by the large dark diamond pattern that follows down the length of their spines over a brown to olive-colored body. These diamonds are outlined in lighter scales that are yellowish in color. Loreal pits are found between the nasal opening and eye. 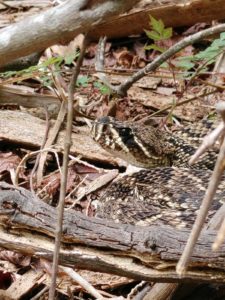 They are found in the southeastern portion of the country ranging from Louisiana to North Carolina. They live in habitats such as salt marshes, palmetto hammocks, and pine forests under dense plant coverage. Eastern diamondbacks may utilize gopher tortoise burrows. They spend the majority of their time under this cover awaiting prey. Prey for the species includes rodents such as marsh rabbits and rats.

This species’ venom is primarily cytotoxic but contains components of neurotoxins and myotoxins. The exact makeup of their venom varies by location and age of the snake. Venom is delivered by long hinged fangs. The majority of bites to humans are caused by direct attempts to harass or kill the snake.

Eastern diamondback rattlesnakes are an ovoviviparous species giving birth to live young rather than laying eggs. In ovoviviparous reproduction, young hatch from eggs within the mother and are not connected to her by a placenta. Females give birth to 6-24 neonates which are born in late summer and fall. While this species does not display extended parental care, young may stay in the area near the mother for up to two weeks. This species does not reproduce quickly, giving birth every 2-3 years, and a female may only give birth once or twice in her lifetime.

Related:  Mojave Rattlesnake (Crotalus scutulatus) - One of the World's Most Venomous Snakes 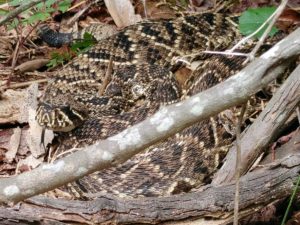 A common misconception is that one can tell the age of the snake by the number of segments in its rattle. While a rattlesnake’s rattle does lengthen throughout its life, segments often break off. Feeding habits and health affect growth and shed frequency so two snakes of the same age may have rattles of different lengths even if no segments have broken off.

Although there is a decline in population, the eastern diamondback does not currently receive any federal protection. Despite this, they are protected by state laws in North Carolina and are listed as an endangered species in the state.

All photos by the author, except the featured image by Joe Milmoe used under the creative commons license

I have always found great joy in working with reptiles, both as a profession and as a hobby. I have worked with snake species from all over the world and am still just as happy to see a tiny Dekay's brownsnake as I am a large eastern diamondback. I enjoy spending my free time educating others and expanding my knowledge as well.

View all posts by Maryann Barbon